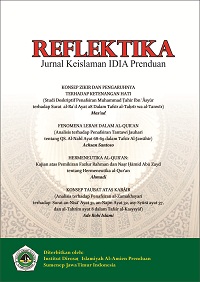 Reflektika is published twice in a year, in January-June and July-December in online and printing version, managed by Open Journal system  of Al-Amien Prenduan for Islamic Institute (IDIA Prenduan) Sumenep. Reflektika  is a peer-reviewed journal which is highly dedicated as public space to deeply explore and widely socialize various creative and brilliance academic ideas, concepts, and research findings from the researchers, academicians, and practitioners who are concerning to develop and promote the religious thoughts, and philosophies. Nevertheless, the ideas which are promoting by this journal not just limited to the concept per se, but also expected to the contextualization into the daily religious life, such as, inter-religious dialogue, Islamic movement, living Qur'an, living Hadith, and other issues which are socially, culturally, and politically correlate to the Islamic and Muslim community development. Thereby, the substance of the article which is published expected be able to underline in promoting the value of tolerance, moderate, and contextual, especially which is setting out the values of transformative-humanistic and integrative to the value of local wisdoms. Institut Dirosat Islamiyah Al-Amien