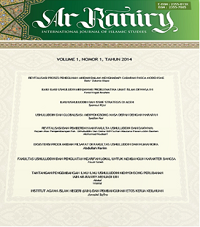 Ar-Raniry, International Journal of Islamic Studies is a scientific forum to publicize and publish scholarly writings of scholars both from the State Islamic University (UIN) Ar-Raniry, and other universities of national and international level. The presence of this journal is intended to respond to the actual development of academic issues related to Islamic studies, both in the field of Islamic education, Al-Quran and Hadith, Thoughts in Islam, Fiqh and Islamic Rules, History and Civilization of Islam, Language and Islamic literature, Da'wah and Islamic Communication and Modern developments in Islam. The presence of this journal is expected to give constructive and comprehensive contribution in enlightening the wealth of Islamic knowledge.The Ar-Raniry has been published since 1967, which was initially called the "Gema Ar-Raniry". The media was in form of a magazine that presents a number of campus development information, both scientific and non-scientific. However, overtime Gema Ar-Raniry continued to improve itself and transformed into a journal entitled "Ar-Raniry, International Journal of Islamic Studies". It published two editions annually, in June and December by the Ar-Raniry Press which is under the auspices of the State Islamic University of Ar-Raniry Banda Aceh.Ar-Raniry invites various scholars who are interested in Islamic studies to publish their article in its journal, either article resulted from research, conceptual ideas, and book reviews. Articles can be written in three languages; Indonesian, English and Arabic.